Did you know Bran also writes? When he’s not making music, Bran likes to spend time exploring his creative universe in his head, self-publishing them under his “mundane” name, Bryan Boring Van Unen.

He has 3 books currently available:

Chronicles from the Court of Nightmare (2020)

I have had many weird dreams over the years. Captivated by the detailed, narrative-driven, bizarre nature of my dreams, I have always been eager to share them with friends, family, and the occasional stranger. Now, finally after much convincing, I have put the dreams down in writing.

This book contains 32 hand-picked dreams to make you go “What is wrong with him?” I’ve also added over 10 illustrations and original dream journal sketches to accompany the retelling of my nocturnal subconscious cinematic stories

Max has a broken pocket watch, but when he discovers he can control it with his mind, the watch begins to reveal a deeper mystery. With the help of Andrea, a modern day witch, they attempt to learn more about this enigmatic pocket watch. Their investigation, however, leads them down a dangerous path.

Arnie and Tricia suspect something very wrong is happening at night. Their son’s nightmares begin to affect the family, and Arnie’s paranoia about nocturnal burglars makes him realize something sinister might be happening in his very own house.

The watch draws them all together in a mystery whose answers only time will tell.

Can they survive the watchmaker? 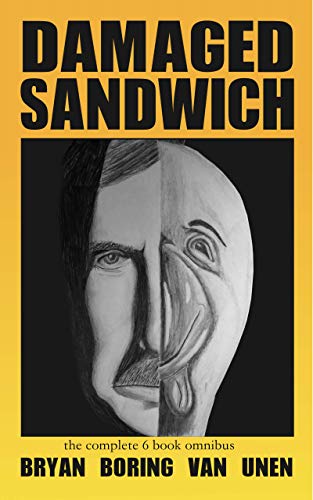 With its beginnings in 2008 as a National Novel Writing Month project, Damaged Sandwich is a 6-book series of extraordinarily off-the-wall proportions, telling an epic adventure of what happens when boring meets bizarre.

John Jacob is a grumpy man with a promising career as a local radio personality and TV narrator. But his livelihood is at stake when, inexplicably, he can only say one word: milk.

Flabs is an invisible rubber chicken from another dimension, running from the evil Citizen Management Agency of Chickenistan.

Together, John and Flabs plunge into a bizarro conspiracy that begins in a zany super-supermarket with rhyming aisles, and ends with inter-dimensional turmoil as realities collide.

And that’s only book one…